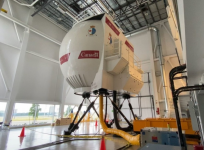 The new full-flight simulator allows the Coast Guard to offer helicopter pilots training opportunities that would otherwise be difficult or impossible to achieve while training in an aircraft. The simulator is designed to offer experienced pilots alike an immersive simulated flight experience, and can replicate a variety of flight and weather conditions faced when flying a Coast Guard helicopter in various parts of the country. The simulator will allow Coast Guard helicopter pilots to train for the sometimes difficult flight conditions experienced such as inclement weather, missions on top of a mountain, sling load operations, Arctic operations, as well as search and rescue.

The simulator will be based at the Transport Canada Training Centre at the Ottawa International Airport, where helicopter pilots will be able to complete training in an innovative and cutting-edge environment.

"Through the Canadian Coast Guard's Fleet Renewal Plan, we're ensuring our members have the best available equipment both in training and on the job. The new full-flight simulator is cutting-edge technology that will be used to safely train our Coast Guard helicopter pilots, providing a realistic and immersive training environment. Congratulations to everyone at CAE who have contributed to the design and construction of this remarkable simulator." The Honourable Bernadette Jordan, Minister of Fisheries, Oceans and the Canadian Coast Guard

"The Government of Canada is committed to providing the Canadian Coast Guard with the equipment that they need to accomplish their critically important work. The contract for the design and construction of the helicopter full-flight simulator has helped to create jobs and generate economic benefits for Canadians, and today's delivery of a simulator will provide a safe environment for pilots to train for difficult missions." The Honourable Anita Anand, Minister of Public Services and Procurement

"I am very proud today to see the full-flight helicopter simulator added to the Coast Guard robust helicopter flight training program. This highly innovative and advanced simulator will significantly enhance the pilots' ability to train for a wide range of missions specific to Coast Guard operations. I congratulate CAE and its workforce for delivering this innovative training tool that pushes the boundaries of creating a realistic and safe training environment for helicopter pilots." Mario Pelletier, Commissioner of the Canadian Coast Guard