"Supplying future needs of the Turkish Navy, providing design of a new FAC for replacement of the aging classes"

Background of the TTHB project, and early phase of the Request for Information addressed by SSM​

First tendencies by Turkish Navy was to acquire a Fast Attack Craft solution based on a composite structure that provides a light structure, naturally low RCS and IR & Acoustic signature and armor protection by Kevlar upgrade with ease. Yonca-Onuk, producer of the MRTP (Multi-role tactical platform) series of the boats, were the top-running choice. However, this tendency hasn't lasted. Initial plan was to acquire at least 6 boats with 4 options (expected to grow as many as 15 by the years), in range of 200 to 300 tons with limited endurance, yet rapid strike capability. In addition to the rapid-strike, TN has requested this boat to have cruising abilities above 300 NM of operational range at maximum attainable speed, minimum of 60 knots, at sea state 3 in BS.

Weapon & Sensor configuration was listed and kept pretty much same throughout the evolution of the design.​
First appeared designs are skipped in this article, soon after the appearance TN has shifted their focus towards rather more capable and high-endurance platforms, this was the point where public has met with Anadolu Shipyard's Ada-Class spin-off (Although it was not based on the Ada-Class design, the features and lines were adopted from); an offer for TTHB project that was commonly acclaimed by the public. The designs submitted for the Request for Information adressed by the SSM, was now above 400 tons to satisfy certain requirements related to accommodation and endurance. ADIK's design had 800 tons displacement, WJ based propulsion, with 5 Gas Turbines; 4 x LM500 + 1 LM2500, the latter was merely for booster configuration driving a single WJ, while other 4 GTs drive 2 WJ, 2 GT for each WJ. It has topped 60+ Knots, with a displacement type of the hull operating in semi-planning regime supporting its dynamic stability. It was not a FAC, however, may be assumed as a Corvette at this size and completely unaffordable. 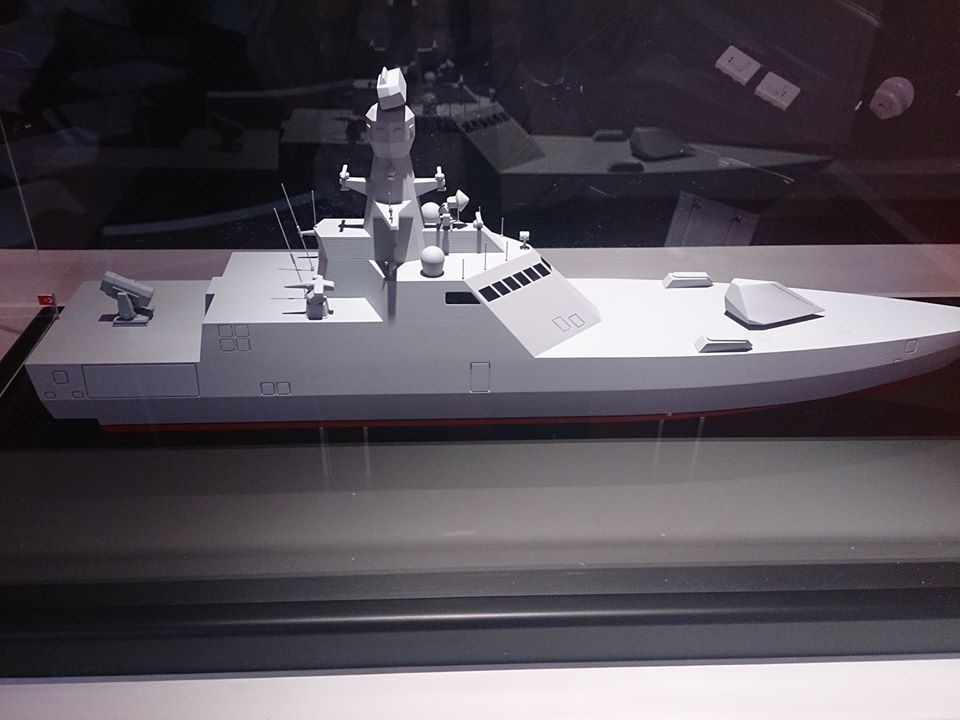 The design has features a low-RCS platform with embedded (not pop-up) AShM launches, by directly adopting the Ada-Classes mast with ESM module and 3D search radar. Along this, other designs stemming from the same design office were made for other shipyards, briefly Desan, Sefine, Istanbul Shipyard. But the other eye-catching design(s) was RMK Marine's 2 distinct offers. The propulsion system of these designs were not disclosed publicly, however one may assume the design on the left has used 3 water-jets (possibly GT-COGAG), 1 in booster configuration and the one on the right has utilized 2 water-jets, both powered by dual engines on each WJ (GT + GT COGAG) 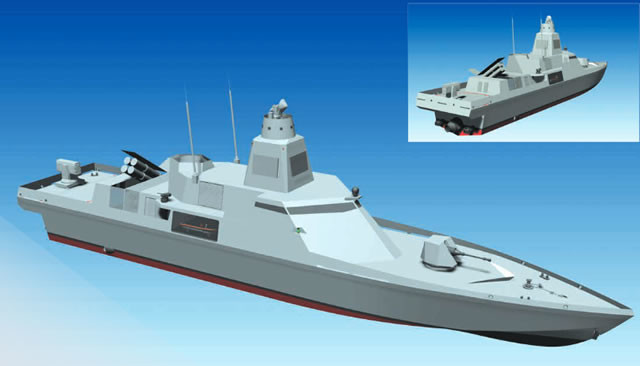 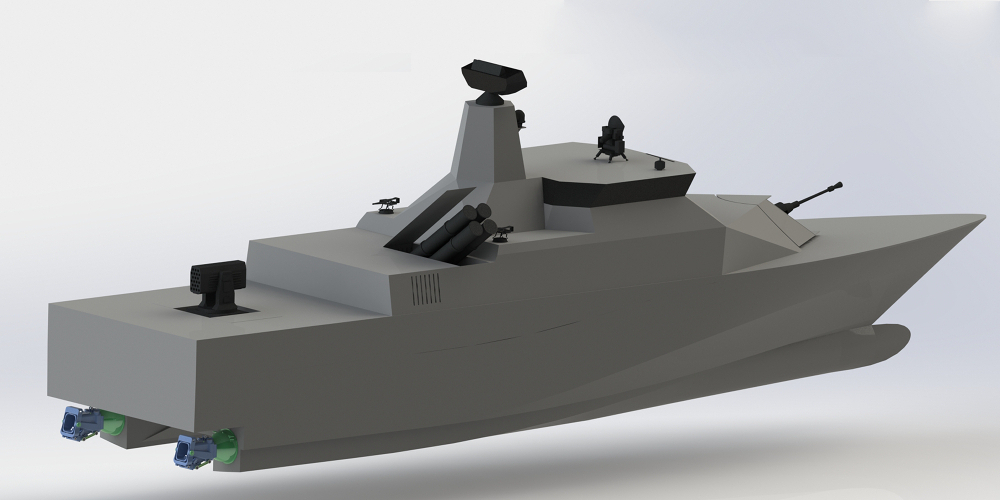 One of these designs is focused on providing an integrated mast, a solution offered jointly by RMK and Aselsan with an APAR based 3D search radar, pop-up AShM launchers (left or upper image), and the latter is focused on providing a novel design jointly by RMK Marine and foreign partner (design solution) that focuses on a contemporary semi-catamaran hull form with embedded main gun and pop-up AShM launchers. Judging from the size these designs were in range of 450 to 600 tons of displacement and as of then, out of the range which was set by the Navy.
Another offer has arrived from Dearsan, a solution based on the novel YTKB design, with increased capacity and high speed profile. Main propulsion was COGAG.

Until now the scene was occupied by the platforms which were resulting in a high-visual profile (except Dearsan), against what TN had been seeking; being able to operate in Aegean sea with low-visual, IR profile in addition to the low-RCS since it was more prominent for these FACs to be engaged by anti-tank missiles as well as the coastal AShM defences. Only Dearsan's platform has approached towards a low-visual profile yet it has failed providing sufficient technical details on IR and RCS signatures.

Then, STM a company affiliated with SSM has proposed a new design, somewhat by knowing what TN had been seeking, a new design with extremely low-RCS as well as very low visual profile with small DWL (less than 1.5 meters) and Overall Depth, FAC-55. Let us note it here, TN had an abrupt speed requirement since the beginning, which was above 60 Knots in the beginning, later was updated as 55 knots with the increasing size. This range of speed is only achievable with all-gas turbine propulsion and water-jet for this scale of the platform. STM's FAC-55 was powered by 3 Rolls-Royce Gas Turbine each powering a water-jet totalling 28 M installed power (Note, Ada-Class is equipped with 32 MW of installed power), one in booster configuration other two in steerable condition. 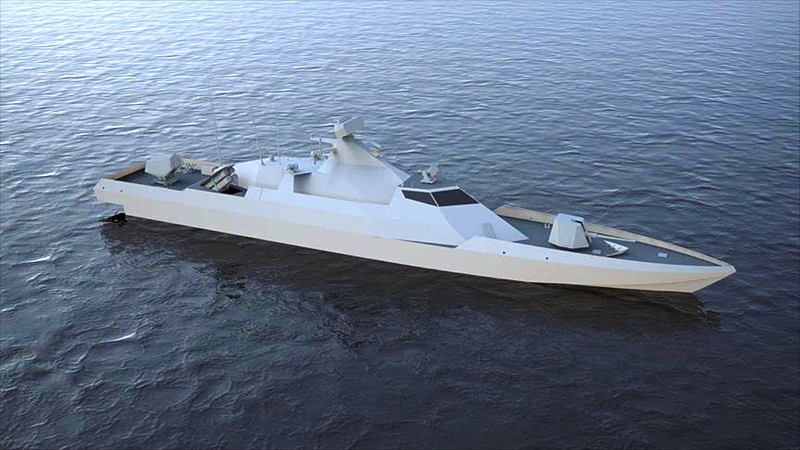 There were no remarks on which design was chosen, yet TN has signed concept development project, Phase I with STM in coordination with SSM (SSB). At this stage concept of the FAC-55 was studied thoroughly via certain modifications, towing tank experiments both for resistance in calm seas and sea-state 3 were conducted. In addition to these, STM has carried out the preliminary studies for signatures and assessed the design in terms of applicability. TN has made requests while Phase I was ongoing and the ship's displacement has increased continuously and reached a point where the hull is rendered inable to satisfy 55 Knots requirement with 3 GTs, resulted in an update of 50 Knots.
​

Phase II of the concept development project signed with STM, in coordination with SSB. As concept design phase I was completed on a platform wrapped around the the FAC-55 design, Turkish Navy had introduced new requirements on the accommodation and installed equipment. This has rendered FAC-55 design obsolete, STM has started studies on a new design for the Contract / Functional Design stage. In first half of the 2021 the new design has started to take a shape, a platform rather more capable on the abilities with sacrifice of the visual profile and maximum attainable speed. FAC-55's latest iteration was known to be above 550 tons with maximum speed of the 50 knots in Sea State 3, while maximum attainable speed was not disclosed but expected to be above 55 knots. (5 Knots less, compared to the first iteration). STM, in fact, has showcased the philosophy of the design belonging to the TTHB by the MPAC platform. First shown in IDEF'21, then took its place in the STM's website as of the Q1 2022, repeatedly marketed by STM in all conferences and exhibitions and to special foreign customers - visitors. A new multi-purpose attack platform nearly with capabilities of a Corvette with optional growth space. Upon a personal engagement with STM's engineers, we have found out the MPAC design in fact is not the TTHB itself, but it is TTHB with a "make-up" where visual appearance has been altered to avoid possible license-issues with the TN. Little is known about the TTHB still, as of March 2022, but it is safe to claim, MPAC is what TTHB has become in terms of the design philosophy. This information is based on insider insights.

Major differences are given as follows.​
The updated 3D search radar was not listed among the differences, since the same radar was also planned to be utilized on FAC-55, an X-band based (as of the current choice, may change later thus take it with pinch of salt).

In sum, we can further say that, TN has abandoned the FAC-55 design in favor of a more conventional and flexible MPAC design, MPAC despite of being an uncompleted and untested design, has managed to attract several customers, since it can be easily configured in various roles for various duties including OPV and Patrol Boat roles, FAC roles with different payloads, flexible propulsion options thanks to the larger engine room and allowing on-site overhauling when it is necessary with a comfortable engine-room. We have also delivered the FAC-55 design was not a chosen design in the beginning of the Phase I since TN has habit of being involved in the projects and managing how the design evolves, by the April-2021 In this forum. This information was verified by Nihal Yalçın, Leader of the Electrics&Electronics integration team of the Naval platforms division in STM, in a speech given at STG'22 held by ITU-SAVTEK. Lastly we are saying that TTHB will be MPAC with minor differences on the outer shell which satisfies the certain requirements for TN, protecting the core and main features in dimensions, displacement, sensor-weapon payload, propulsion system et al same. Both SSB & TN have also agreed on working 2 different TTHB designs, with several different features by keeping the concept same, with alternative systems for redundancy - something that SSB applies as a principle with growing numbers of unexpected embargoes.

TN is still interested in high-speed strike capability, What now?​

Yet, again TN still persuades of having rapid-strike capability but MPAC-like platform can only supply 40 Knots speed with an efficient SFOC, 45+ knots speed with manageable SFOC, and may have maximum of the 52-53+ knots attainable speed with unmanageable, inefficient SFOC, yet in all these it has longer operational range than the earlier FAC-55 design. TN still requires a platform that will achieve 60-65+ Knots speed with affordable, reliable propulsion regime and able to deliver at least 4 or 8 Harpoon sized AShM. As a last note here are the two options in review for now.
​
1.Yonca-Onuk's recently revealed MRTP 51 design

MRTP 51 has 55+ (60+ in extremes) knots maximum speed merely by utilizing diesel engines with a planning highly maneuverable hull form with composite material construction. This is rather an update of the MRTP 49 design which was earlier submitted for the TTHB.

The design requirements have not been publicly available for this, but TN has made certain requests on TTHB design, certain abilities on the cooperation with USVs (spare console position, higher electricity and accommodation supply for operators et al.) But an USV design can easily be deployed for rapid-strike actions in coordination with more capable central communication ship. Also an USV would easily attain speeds above 60 Knots, have longer endurance compared to a manned platform thanks to having no crew aboard, and also can be optionally manned with minimal crew to operate the weapons and the navigation.​
Click to expand...
A
Written by