Milgem - National Warship / Milli Gemi - is (was) project that aims to gain abilities and self-sufficiency on the following matters that can be told to be critical within the framework of flotilla design.​
The project has emerged in the 70s, without being named or being called such, with the question asked by an admiral in power " Could we design a corvette by our-own, tailored for us, made by us?" and then repeatedly came into the office or into the minds and debates but had been abandoned for several reasons. Finally, at last in the end of 90s the project has emerged in a solid way aiming to develop ,initially, a corvette that suits need of Turkish Navy and fulfills future doctrine, equipped with cutting edge weapons and sensors with maximum local contribution. The programme ,despite being referred to the Ada-Class - being the first output of the project - , in fact had multiple phases and beyond of what is achieved in Ada-Class.​
The story of Ada-Class, the corvette chapter of the project is mentioned in the following thread of the forum, briefly ; Evaluation of the Milgem Project-Corvette.
The story of TF-2000 project, the frigate then -- destroyer now chapter separately going to be handled in a new thread.

Before going further it is best to introduce actors within the Turkish Navy that plays an important role in the design and construction of the national warships, that are named as;​
Now we have seen the actors, we can further introduce another one; SSB, the place where the funds are collected, projects and procurement are overseen both financially and technically where SSIK a management board with the lead of Presidency is gathered and projects are approved or budgets are allocated.

To add another complexity for further, MSB - Ministry of Defense has established a company that is called ASFAT that privately can manage the military shipyards meanwhile SSB owns a company called STM that is being the contractor of several projects in construction or design stage. For now we can ignore the latest complexity and get into the beauty; TF-2000.

The project as told before has started with the aim of creating a design that can fulfill air-defense duties primarily with the cutting edge technologically advanced equipment. The first designs share a common architecture as seen in European air defense frigates (FFG-AAW), with a fixed-face Active Phase Array Radar (APAR) and rotating-face early-warning radar configured in low-band and 32-48 VLS, from the pictures we may guess the first designs has aimed to have Thales sensor suite. But later, the project has evolved in a strange phase which foreign contribution is approved and Lockeed Martin and BAE of UK has made offers, while LM was going along with the Turkish request on integration of Turkish subsystems into the Aegis command and weapon management system, BAE has offered a simple design along with "partnership" on what called Global Combat Ship. Meanwhile Armerkom and DPO have carried out studies in design, finally concluded in what we have seen in IDEF'19.

What we can call as the first concept, an APAR radar in company of an early warning radar. It is safe to assume these were in S and L band respectively, along with 2x RIM-116 launchers and 48 cell VLS is present for a combination of SM2 and ESSM. 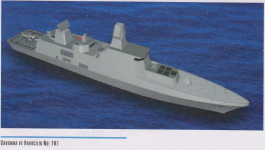 Another design about the same time has emerged that indicates a conceptual study going on, with similar but rather different configuration, a different sensor suite and 32 VLS (probably with an additional 32 placed in elsewhere) and Phalanx CIWS in place of RIM-116 launchers. Also the first design which officially includes the CAFRAD, Multi-purpose AESA radar suite being developed by Aselsan, in company of an early-warning radar resembling thales SMART-L. 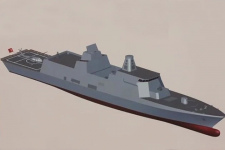 These designs, however didn't last long and finally we have met the following, most-recent form that has been created following completion of feasibility study by ArmerKom and DPO.

That is one of the following options that all studied by ArmerKom, DPO an Aselsan: One of them was a fully-integrated mast similar to the Spanish F-110. 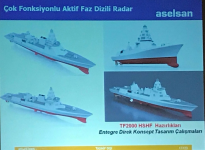 There also have been several alternatives for use of the CAFRAD as shown above, beyond this point we can see the foreign subsystems start to diminish as Turkish producers now offer variety of weapons and sensors. The first mature-concept had the following attributes:​
In last IDEF, held in August 2021, the final form of TF-2000 has been present, Thanks @Altay_TR for the pictures:

Now we can start to talk about the latest form, which TF-2000 officially became TD-2000, being referred as "Destroyer", most of the weapon and sensor systems now updated with Turkish alternatives.
In addition to previous design we can further see:​
3-view of TF-2000

TF-2000 further introduces;​
Concluding the article with a pretty view of weapons and sensor configuration: 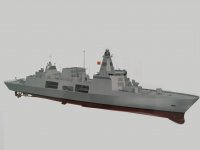