Saithan said:
Could it be related to the post about domestic engines being used in the vehicles to be delivered in 2022?
Click to expand...

I think if that would be the case, it would be announced loud and clear by the SSB 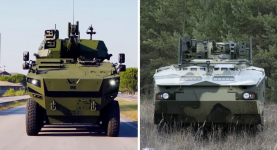 BMC's Altuğ 8x8 is the latest Turkish armored personnel carrier, which was first demonstrated publicly only a few months ago. It is positioned as the top solution of the Turkish defense industry in the field of wheeled armored vehicles, absorbing the most technological developments.

Defense Express, during the SAHA exhibition in Istanbul, had the opportunity to see Altuğ in detail and compare it in absentia with the latest Ukrainian serial armored vehicle - BTR-4 and its more powerful version BTR-4MV1, which, unfortunately, has not interested the Ukrainian military .

The first thing that catches your eye is the dimensions of the Turkish Altuğ, whose height on board is 2.65 meters, and with a combat module of almost 4 meters. The height of the Turkish armored personnel carrier with a combat module is 4.5 meters

For comparison, the height of the BTR-4 is 2.8 meters, which is primarily due to the desire to make the car less visible on the battlefield. 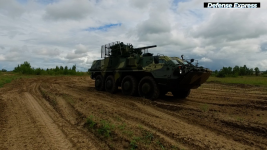 And, at first glance, it seems that inside the much larger Altuğ has much more space. However, in reality, this is not the case, the car, which is designed for 3 crew members and 9 fighters, does not differ much in internal volume. And the main reason for this height of the case - in providing mine protection thanks to the V-shaped bottom. At a time when the BTR-4 only after additional measures, the flat bottom was reinforced with another armor plate with spaced armor.

At the same time, the use of a V-shaped bottom in the Altuğ has resulted in all hydropneumatic suspension components being outside the armored hull and a ground clearance of 40 cm. 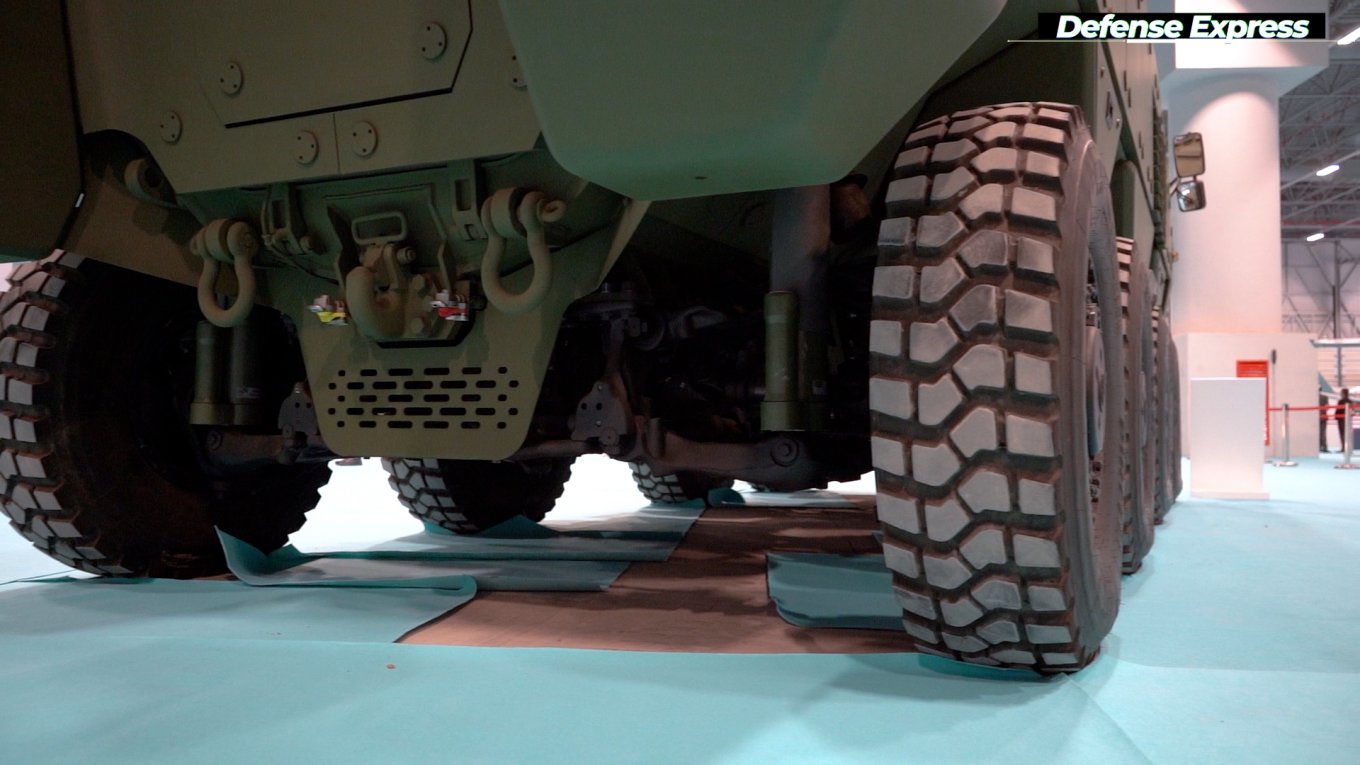 In general, Altuğ has a good passability, including overcoming trenches over 2 meters wide. And all the wheels of the armored personnel carrier are rotary, which makes the car quite maneuverable.

But the Turkish armored personnel carrier, unlike domestic, does not float. The maximum depth of the ford for it is only 120 cm, however, given the geography of Turkey, this figure is not a global negative factor. The approach to arming the machine also needs attention. At the SAHA exhibition, Altuğ was demonstrated with a combat module for 12.7x99 mm and 7.62x51 mm machine guns. This is the so-called version of the APC (armored personnel carrier), which in NATO countries is an armored personnel carrier, in the sense of a combat vehicle, whose main task is to safely deliver fighters to the battlefield. At the same time, there is a version with a combat module for a 35-mm automatic gun. This module from Aselsan is a modified version of the module from the promising crawler BMP Korhan. The more armed version of the Altuğ was designated the IFV (infantry fighting vehicle) - an armored infantry vehicle. Another interesting feature of Turkish design is the maximum use of ceramic armor. The machine in all projections is additionally protected by panels, which in case of damage can be easily replaced in the field. 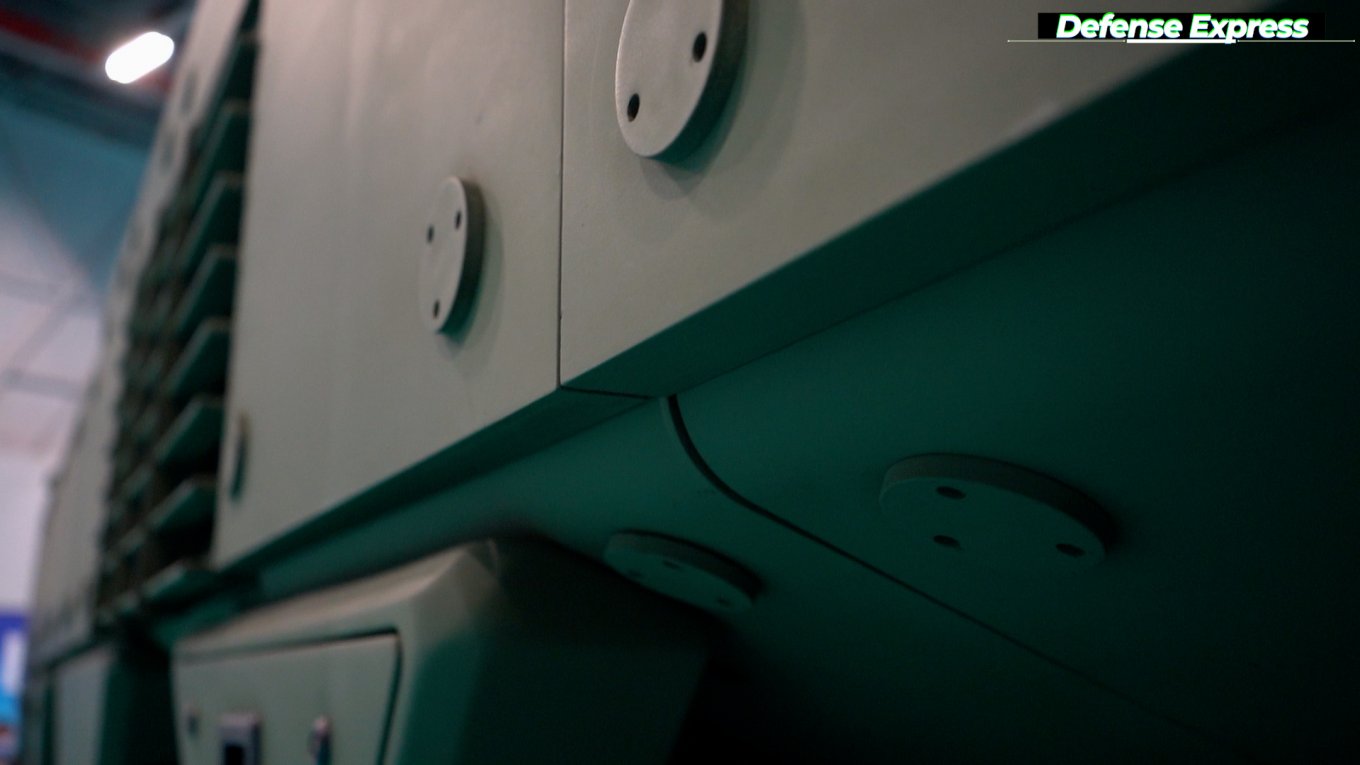 Ceramic panels differ in the accuracy of fitting to the body

But this is not the only means by which Turkish developers have protected their car as much as possible. Attention was paid to reducing the visibility of Altuğ in the thermal range. In particular, the heat from the engine is dissipated in the wheel arches, and the exhaust gases are directed downwards.

A means of reducing visibility in the thermal range

A huge bet was made on the use of modern protection systems. These include laser radiation sensors, an acoustic shot detector, a complex of active protection and a complex of REB for suppression of radio-controlled explosives. The machine is also integrated into the digital military control system type C4I. Unfortunately, we did not see any ceramic armor or similar level of additional protection systems on any Ukrainian armored personnel carrier or infantry fighting vehicle. Although some developments in these areas in Ukraine already exist and may well compete in effectiveness with Western models.

Interestingly, the weight of the Turkish armored vehicle remains a mystery. And although BMC does not disclose the weight of Altuğ, it is most likely about 30 tons. And this is much more than the BTR-4, even in the MV1 version, which weighs about 23 tons.

The level of protection Altuğ is not disclosed, it is probably about the ability to withstand the fire of large-caliber machine guns in all projections

The maximum speeds of Ukrainian and Turkish armored personnel carriers are the same - up to 110 km / h. But if the 450-horsepower German Deutz is installed in the BTR-4, then the American 7-hp Caterpillar is installed in the Turkish armored personnel carrier. Interestingly, Ukrainian and Turkish developers focused on one transmission supplier - Allison. In any case, the maximum speeds of cars are the same - up to 110 km / h.

In general, what conclusions can be drawn after such a correspondence comparison of Altuğ with BTR-4. The naked eye can see the difference when providing high mine protection crosses the size requirements. And the weight of 30 tons, the rejection of amphibians and the widespread use of the latest technologies allows to ensure reliable safety of the crew from enemy fire. The weight of Altuğ is most likely about 30 tons

It should be emphasized that the "recipes" for which Altuğ was created are not Turkish know-how, but following modern Western trends in the development of armored vehicles. The same solutions can be seen in models such as the latest versions of the Finnish Patria or the German Boxer. Of course, these "recipes" are not a panacea. However, they fully reflect the vector in which the world moves in the creation of such machines and in seeing their place on the battlefield. 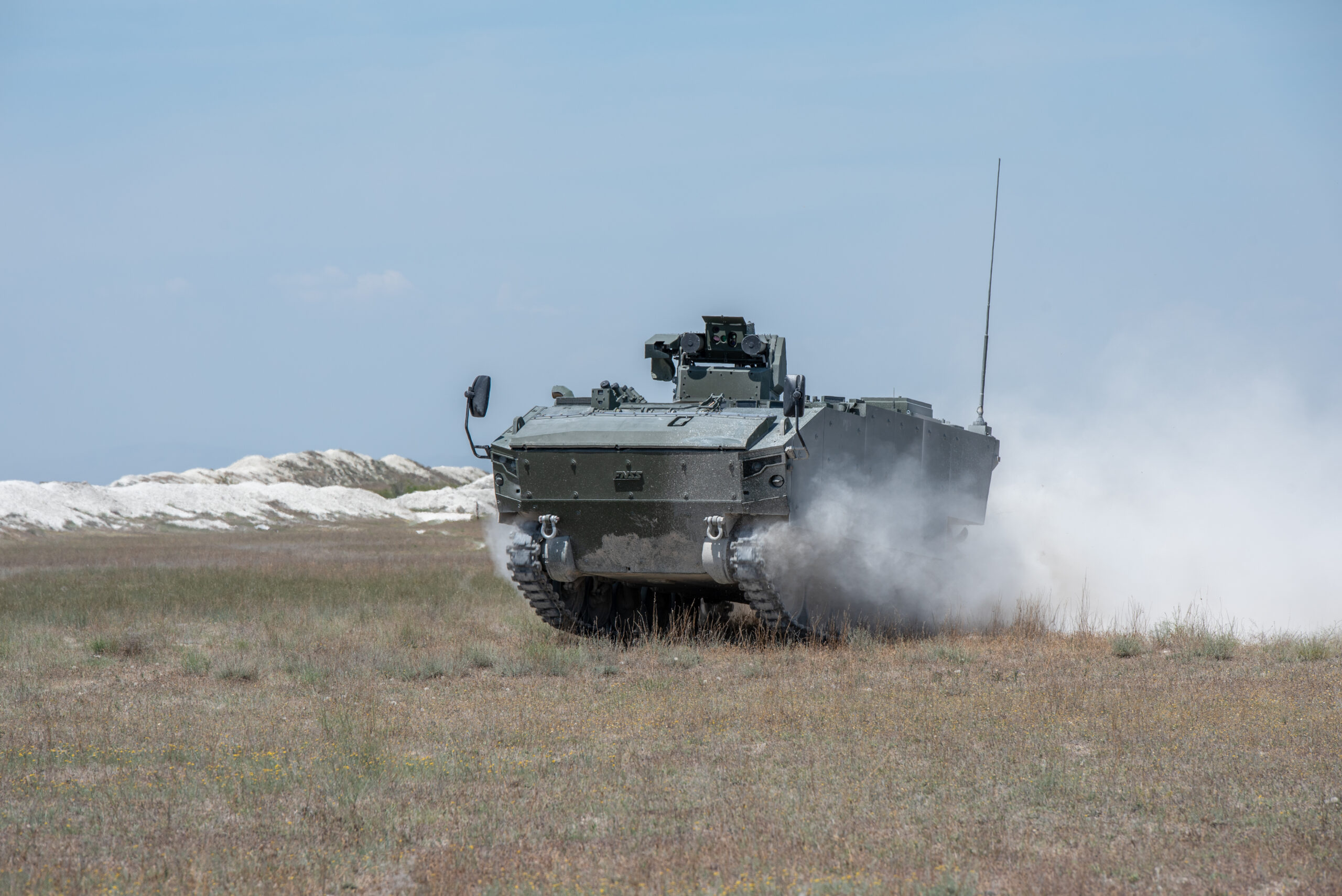 Yalman integration continues and will be completed in 2022, with a delay of nearly a year.

Yalman integration continues and will be completed in 2022, with a delay of nearly a year.
Click to expand...

Would be nice if they integrate KUZGUN KY in the future, proper BLOS capabilities then.

Mraps are perfect for African terrain.

No surprise that African countries buy lots of mraps rather than buying tanks, apcs or ifvs.

Yalman integration continues and will be completed in 2022, with a delay of nearly a year.
Click to expand...

Combat-Master said:
Would be nice if they integrate KUZGUN KY in the future, proper BLOS capabilities then.
Click to expand...

I know it's designed to hunt tanks, but if TB2 can take out tanks then STA would need a secondary role. Perhaps something like Drone hunter or such (perhaps that's why it has Cirit).

Would it be possible to make autoloader to this type of vehicle and would it make sense ?

I am thinking of the armoured vehicles that have built-in mortar solution, where the top can be popped and mortars can be fired from inside the vehicle. 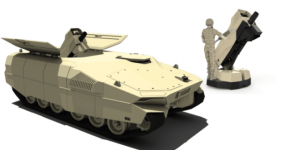 Aselsans AHS-120. Imagine if the mortars could be Laserguided Mini drones lighting up the target Mortars hitting hard. Why don't we have Tracked IFVs?

"PARS 4×4 STA has been developed as a collaborative work with Nurol Makina as of the design phase. Kurt said the following about his subject: “This project draws attention with the fact that the design works were carried out in the partnership of two companies"


These Infos are from FNSS website and DefenceTurk for YÖRÜK
Comparing these two it seems very apparent that they are quite similar especially considering that NUROL was involved in both projects.

The similarities are suggesting a Identical Chassis.
So just like with Ejder Yalcin 4x4 I went to the CZECH Company ADS.

Advanced Design Solution s.r.o. is an engeneering company that provides complete solutions for driveline systems based on independent suspension axles.

Under News they posted about IDEF19. 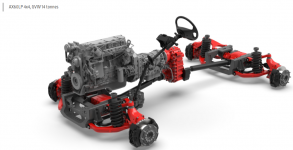 So they brought this Complete Drivetrain Solution to IDEF19 which is likely used in Nurol Products, in this Case YÖRÜK
Which begs the Question why it took Nurol so long to Produce Yörük IF they are just adding to Complete Drivetrain...

On a Side Note they also brought the AX95 Drivetrain which is also used by a Nurol Company. FNSS.

This one is in the New FNSS PARS IV.
Mind boggling.

Thanks to the CZECH just with ANADOLU Savunma Seyit which is also using CZECH Tatra Chassis.

completed mine and ballistic tests.

continues its Reliability and Maintainability Test with land and sea driving. 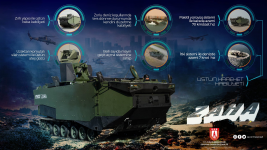 From top in clockwise direction;

——————
I thought the last two variants were already covered with the Pars Izci acquisition?

——————
I thought the last two variants were already covered with the Pars Izci acquisition?
Click to expand...

The Pars IZCI has been developed for the ÖMMTZA Programm. This was initiated in 2008!
The program faces a delay of 13 Years. I Guess they just overlapped.

"Arma 6x6 is currently one of the candidates competing in the Special Purpose Tactical Wheeled Armored Vehicle (OMTTZA) tender.
The ÖMTTZA project, which includes the domestic production and integration of 6x6 special-purpose tactical wheeled armored vehicles, in order to contribute to the execution of CBRN (Chemical, Biological, Radiological, Nuclear) reconnaissance missions with tactical level reconnaissance and surveillance, 39 Command Vehicles, 114 Sensor Vehicles, 113 It includes Support Vehicles, 40 Radar Vehicles, 60 CBRN Reconnaissance Vehicles.
In the Project, the Call for Proposals File was published on 07.03.2008. FNSS, Hema and Otokar companies submitted their offers as of 24.04.2009." 
This was clarified further by the Acquisition Program in 2018. "On the second day of the Land Systems Seminar, important information was included in the Security Vehicles and Special Vehicle Projects presentation held by the Defense Industry Presidency (SSB) Land Vehicles Department. A total of 5831 vehicles in different configurations are planned to be supplied in the projects."

These were two separate Acquisitions while the ÖMTTZA program was direct purchase from FNSS.
The YNZHA Program was decided to hold a Competitions in order to make a purchase.
B

——————
I thought the last two variants were already covered with the Pars Izci acquisition?
Click to expand...

Probably a different kind of radar/sensor will be used on these. I know the radars that will be installed on the pars Ömttza will be for land recon, these will probably be for artillery or air defense

Manomed said:
Why don't we have Tracked IFVs?
Click to expand...